Legend of the Sacred Cats of Burma 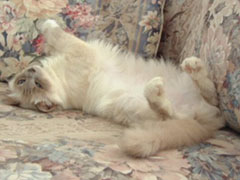 The legend states that many years ago before the birth of Buddha the Kymer people of Burma built wonderful temples to their Goddess Tsun-Kyan-Kse. The most beautiful of these temples at Lao-Tsan contained a solid gold statue of the Goddess, with sapphire eyes. The priests of the temple also kept one hundred pure white cats as companions and temple guardians. The elderly head priest Mun-Ha had an especially devoted friend in his cat Sinh.

One stormy night, a marauding horde attacked the temple, killing the priest Mun-Ha. Immediately the cat Sinh leapt to assist his master, and as he stood on Mun-Ha’s dying body before the golden Goddess, the priest’s soul entered into Sinh and the cat’s appearance was changed to one of great beauty, complete with golden tipped coat and sapphire eyes. The feet of the cat remained white, however, as they had touched the blood of the martyr. Inspired by this sign from the Goddess the other priests drove out the raiders and saved the temple.

Next day the remaining ninety nine temple cats were found to be transformed just like Sinh, and from then onwards they were regarded as Sacred Cats, and thought to contain the souls of pious priests on their way to heaven.

I don’t know if any of this true, but I can tell you that the Birmans I have owned have always been as smart, affectionate and chatty as they are beautiful. And the legend only adds to their charm!