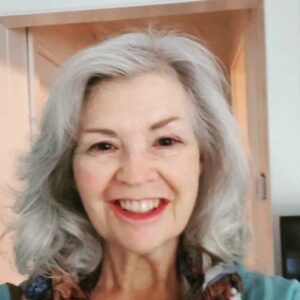 Lynda Simmons is a writer by day, college instructor by night and a late sleeper on weekends. She grew up in Toronto reading Greek mythology, bringing home stray cats and making up stories about bodies in the basement. From an early age, her family knew she would either end up as a writer or the old lady with a hundred cats. As luck would have it, she married a man with allergies so writing it was.

Shortly after her first romantic comedy was published by Harlequin, Lynda started teaching creative writing at Sheridan College in Oakville. Being Aquarian and crazy in the way that all writers are, Lynda would never have had the patience to deal with administrators in a full-time teaching position. But creeping in at night when the bureaucrats had gone home and it was just her and a room full of people who wanted to write? That was bliss, and she kept going back for more.

As much as she enjoyed teaching creative writing, Lynda quickly realized that something big was missing from the Sheridan calendar – a novel writing course. She proposed the course to the college, was asked to write the curriculum and Crafting A Novel Part One was born. Within two years, the demand for more led to the introduction of Part Two and now both courses are a compulsory part of the Creative Writing program at the college.

After seventeen years of writing and teaching at both Sheridan and Ryerson University, Lynda knows the joy of not only watching her own ideas come to life on the page, but also the satisfaction that comes from helping someone else turn their idea into a story.  Being invited to the book launches of former students who have gone on to be published is number three on her list of favourite things, right after cats and canoeing.  And that shelf full of books that have her name included in the acknowledgements? That’s not only number four on the list, it’s also a real source of pride.

These days, Lynda and her husband live in Burlington, a small city outside Toronto. Their daughters are grown now, but of course there’s a cat – a beautiful if spoiled Birman. If you’d like to know more about the legend of Birman’s click here. For allergy information, click here.

When she’s not writing or teaching, Lynda can usually be found biking around town or canoeing at the cottage, but only in good weather. When the snow falls, she and her husband escape for a few weeks to sunny Sanibel, an island off the coast of Florida where seventy percent of the land is nature preserve and bikes are part of daily life. When she gets back to the cold reality of winter, she gives serious thought to using the treadmill in the basement. Fortunately, she’s found that if she waits long enough something else will come along and save her. Like email or a whistling kettle, or even that cat looking for a little more attention.