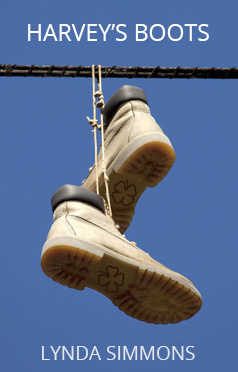 Harvey Kendal has a deep and abiding faith in the power of rabbits’ feet, four leaf clovers and anything else believed to bring luck to a man. As a rule, Luck finds the devotion of humans tedious, but this Harvey fellow is in a class by himself. And damned if his wife isn’t one of those rare mortals who sees gods and magical creatures as they truly are. Cupid and the Fates can be a lot of fun when they’re drunk. It’s just a shame the wife isn’t smarter. Luck has plans for Harvey, and Pam would do well to stay out of his way.

“Lynda is the master of quirky characters and compelling plots in slightly sinister tales. With Harvey’s Boots, she kicks you into an entirely different world and holds you there, spellbound.”
– Sylvia McNicoll, award winning Canadian author

Follow Ms. Simmons on a wild ride down the rabbit hole of her incredible imagination into the shadowy nether world of the inveterate gambler where you’ll meet characters you’ll never forget!
– Mary Haylock, Stephen Leacock nominee Moments On A Staircase

“A page turner that will both satisfy and enchant its readers.”