John’s mother never liked me. I was a bad influence, a drain on his finances, and worst of all, a sign that he’d given up. When we married, she didn’t come to the ceremony. She wintered in Florida after all, something we were well aware of when we set the date. It was bitchy of me, I know, to pick Valentine’s Day, but if we were going to live the cliché anyway, why not do it right? And the honeymoon suite with a heart shaped tub made the two of us laugh, and laugh, and laugh.

That was something she never understood, the way we could make each other laugh. That we were best friends before we were lovers, brought together by a dogfight in High Park on a Saturday afternoon. He had a pug, I had an Irish Setter, clumsiest dog you ever saw, but loyal and loveable –  kind of like John himself and our dogs weren’t doing the fighting. We were passing through the park, going in opposite directions, when the barking started and we both stopped to see what all the commotion was about.

The excitement was over in seconds but we stayed put, letting our own dogs get acquainted. Chatting about nothing really, but neither in a hurry to leave. He said he lived in Etobicoke, had an office nearby and often brought Wellington with him on the weekends. The dogs grew restless, I said goodbye and thought that was it, until three weeks later when I was leaving my building and noticed this gawky guy sitting on a folding chair by the curb.

Apparently he’d been listening when I said I lived in a building designed by Uri Prii. That doesn’t mean a thing to most people, but John knew there are only a handful of those in city, and he had stationed himself in front of one building every weekend since, determined to find me. Over dinner, he said he had regretted not getting my number at the dog park, but he was shy, you see, and had recently ended a long term relationship with a girl his mother approved of, and he had never been good at dating.

The rest is story book history, I suppose, and we intended to live happily-ever-after in my Uri Prii condo. But as my Scottish granny used to say, the best laid plans gang aft agley, and John died two days ago. Hit by a car while riding his bike to work.

His mother blames me for that too. Tells everyone who comes through the door of the McNaughton Funeral Home that it was my insistence on living in the city that killed him. He would have stayed put, she says, straightened his life out, found his way again if I hadn’t thrown my dirty self at him. Lured him into a life he wasn’t made for with the kind of sex that only the likes of me could know about.

The funeral director approaches, asks me if the arrangements are to my liking. Makes his mother crazy that she does not have the right to dictate the kind of memorial we have. That privilege goes to the spouse.

So there is no priest and no coffin. No prayers and no preaching, because that’s not who we were, who John was. Instead, there are pictures and flowers, coffee and cupcakes, and Bohemian Rhapsody by Queen on repeat from my iPod.

The room fills up fast and no wonder. I wasn’t the only one who loved him. Most faces I don’t recognize and the folks on her side ignore me, of course. But enough people hug me, tell me how sorry they are, let me cry in their arms which annoys his mother and gives me an odd, guilty pleasure.

Someone tells me it’s time for the eulogy. I step up to the podium. Stare out at the crowd. I have nothing prepared. What do you say when the love of your life is suddenly gone? Do you tell people that every breath is an effort, every movement painful? Mention that his death became real just that morning when the snow was falling and your car was covered and for the first time in ten years, there was no one to race out and clean it for you? Admit how terrified you are that no one will ever again love you that much? Confess that his mother may have been right along? That you did indeed make his life more complicated and messy and you probably didn’t deserve him?

But the thing is, John loved me and I loved him, and against all odds, we were happy. Truly, deeply happy. What kind of mother doesn’t wish that for her son?

I glance over at the picture of our wedding day, see his great big smile, hear his wonderful laugh, and find the strength to open my mouth, to speak of the man I love, and will miss till the day I die.

“Today,” I say, “we are here to honour the life of John William Trelevin. And for those of you who don’t know me, I’m his husband, Danny.” 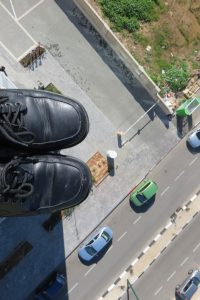 To be, or not to be. It’s a simple enough choice so quit waffling. Pick a side and get on with it because either way, you’re screwed.

Funny how everything seemed just that easy, that black and white when the diagnosis was first made and later confirmed by every specialist I could find. Including the one in Buffalo who charged me over a thousand dollars to tell me exactly the same thing the ones up here had told me for free. My future is not rosy. Best to update the will, pre-arrange the funeral – always a thoughtful thing to do – and above all, tell no one what I’m really planning.

Two years have passed since then. The loss of motor function is evident and startling and the side effects of the medications that control it are almost worse. The time to go has come. The loose ends are tied up, the note is in the envelope and suicide is painless, after all.

But sitting here with my assembled methods of departure spread on the table before me, I can’t help wondering if that’s true. The poet wasn’t writing from experience, after all, merely positing an opinion. Did he ever imagine someone like me? An old guy with trembling hands and a pounding heart, hearing that song in his head while he tries to decide between painkillers, a noose, or a car in a closed garage. Hoping to God that the poet is right and his own choice wise, because he won’t get a second chance.

Screw this up and the good people in my life will lock me down hard and fast. Out of love, they’ll say. And respect for life, they’ll cry, parroting the advocates for people with physical disabilities. Well-meaning souls who lobby hard against assisted suicide because people like me scare the crap out of them. As though allowing me a choice will mean an end to theirs. Raising the spectre of Nazi death squads, sounding the alarm against a future filled with Clinics For Those Who Are Better Off Dead and needles to dispose of them quickly and quietly. What utter nonsense. My choice won’t affect a damn thing in their own lives, but their tactics are effective because people tend to see the issue in black and white. Just as I did a few short years ago.

But after researching the facts, I now know that nothing is as simple as it seems and the choices before me seem anything but painless. For example, the painkillers that should allow me to fall asleep never to rise again, might actually make me throw up enough of them to keep me alive, but only after irreparable nerve damage has already been done. Which is why the noose fashioned from a green extension cord seemed like a good alternative.

But the noose must be correctly positioned and the jump done from a proper height, something I’m not convinced I can manage on my own. Which means I might end up dangling from the chandelier in the foyer for hours, very much alive but severely brain damaged from lack of oxygen, bringing me to door number three – the car.

A rusting PT Cruiser in a closed garage should do the trick. Unless I chicken out before falling fully asleep. Turn off the car and end up sitting behind the wheel, still breathing but with irreparable brain and nerve damage.

Do you see my dilemma? So much easier to get on a plane bound for Sweden, but how would I explain the credit card charge to my wife of forty years, who is busily planning expensive modifications to the house. Prepared to use the money that should be taking us to see our grandkids in Calgary every summer for ramps and stair lifts and special tubs instead. Doing everything she can to accommodate the future that inevitably lies before us. Unless this goes well today, of course. Once my sorry butt is out of the way, she can have a life again. And that my friend, is what real love is all about.

Deciding a combination of pills and car will guarantee success, I down four of the little beauties and head to the garage. The door is closed and the gas tank full. A vacuum hose would speed up the process, but the less cleanup the better. Unlike the extension cord scenario, cleanup here will be fast and easy. Just tow the clunker out of the garage, and you’re done. No muss, no fuss, no lingering stains. And the note should take care of any guilt my wife might feel.

The pills are already starting to work. I’m feeling warm and fuzzy. No pain at all.

Get myself into the garage. Settle into the driver’s seat. Pause a moment to catch my breath, listen to other car doors opening and closing outside. Neighbours coming and going, unaware of my intentions. Eyes are heavy, hard to keep them open. Just need the key in the ignition and I am good to go.

Fish around in my shirt pockets. First one side, then the other. Takes a while to get my stubborn fingers to co-operate. Longer for my brain to realize the key isn’t there. Where’s the goddamn key? Still on the table.

A picture of it right there between the extension cord and the note fills my head. My hand falls to my side. Can’t lift them up. Eyes closing. Tears burning. Stupid old fool.

The door beside me opens. A voice, my wife, whispers, “I understand.”

Her lips are warm against my cheek. The car starts and I hear that song again, as soft and reassuring as her fading footsteps. This, my friend, is love. And I hope to God she’s already figured out an alibi.