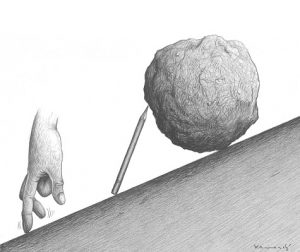 As a professional writer and writing instructor for over 17 years, this November marked my first foray into the madness of Write A Novel In A Month, otherwise known as NaNoWriMo. The acronym has always intrigued me because the first thing I see when I look at it is No Write More, an interesting conundrum when the goal is to pound out roughly 1600 words a day, seven days a week for 30 consecutive days, but I digress.

While the concept of banging out a quick and dirty first draft is a good one, it’s not something I’ve ever been able to do. I can write 5,000 words a day when I need to, but that is something I call Deadline Hell. The place I enter when I have a contract in hand, have already cashed the advance cheque and the deadline for submission is approaching.

By the time I descend into Deadline Hell, avoiding all human contact because I rarely shower, never shave anything and all communication comes in the form of a grunt, I’m well into the book and the story can pour out. It’s rarely beautiful as it pours and later I’ll take out redundancies and add in whatever I’ve missed, but when I stumble out of bed at three in the morning to pick up where I left off, I do so with direction and confidence.

The very opposite is true when I start something new. I have a vague idea of where I’m headed but no clear idea how to get there.

Yes, I teach writing and yes, I use all the tools that I share with students. Character Sketches. Wants, Because, But. What’s At Stake? Plotting Through Character Arc. All of these and more come into play when I sit down to write, but at that stage, the words on the page are not cohesive or logical or even readable. They’re musings and observations. Following the characters as they walk around and talk to each other, letting them get to know each other and allowing me to understand who they are beyond the static facts of the sketches I wrote. Until I do that, all the planning in the world doesn’t matter. I have to hear their voices, let them speak for themselves and sometimes I have to kill them off and start again because they want to be in a different kind of book entirely, not the one I intend to write at that moment.

After eight novels, six novellas and a raft of other writing, it still takes me a while to feel my way into a new story. I usually write the beginning a number of times, coming at it from different points of view or settings or moments in the story. This can take days and none of the effort is wasted because each time I write that opening, I’m learning more about the story. I’m figuring out what the hell I’m trying to say because if I don’t know that then I need to stop spewing out words and find out.

Then of course research pokes its head into the mix. Perhaps it’s a weakness, but I can’t write without knowing what I’m talking about. A single line on the page that came out of nowhere – and is often as simple as a dog walking into the action – can mean a lost hour finding out about that breed and resulting in no words on the page. And therein lies the problem for me with NaNoWriMo.

Being competitive by nature – something that all the positive affirmations and deep breathing exercises will not change – those lost hours of research and pages of drivel only served to make me tense and irritable because the word count had to reach a certain level every day or else I was a failure. And all of those words on all of those pages did not count. They were part of a process, quick and dirty writing at its best or worst, but as vital as that process is to me, they did not a story make. They were merely planning and I could not in good faith put them on that pulsing NaNoWriMo chart.

Go ahead, tell me that’s not the point of the exercise, tell me I’m an obsessive/compulsive idiot who doesn’t get it. The truth is that I am obsessive/compulsive, and undoubtedly crazy because I dwell on people who don’t exist and things that never happened, but that’s what makes me a writer.

The knot in my gut that forms when I don’t write is real, but nearly a month in Deadline Hell hasn’t made it better, it’s made it worse. I park my butt in the chair and my fingers on the keyboard as required to make any book come to life. But instead of anything remotely resembling a story, all that came out was gobbledegook, which only served to make the knot bigger.

Now five pounds heavier and sunlight deprived with a week left to go in NaNoWriMo, I realize it’s time to stop. Deadline Hell is a place I need to go to when I know the story, not when I’m in the early, development stage. Perhaps this is something that others also know and they enter the fray at that point in order to push the sucker out. But it seemed to me that the point of the exercise was to get a first draft of a new work done and over with. Spew it out, clean it up later and count every single word toward your goal. Sadly, the perfectionist that is part and parcel of being obsessive/compulsive only allowed me to count the words that form a story and drive it forward.

A week before the month ends, I have a Word document filled with thousands and thousands of planning words, and another with 5,000 solid, usable words. I have the beginning of a story I believe will be good, perhaps fabulous, and I’ll keep going forward because that’s what a writer does. But I’ve confirmed what I’ve always instinctively known: I’m not a good candidate for NaNoWriMo.

So I’m bowing out gracefully, coming up from Deadline Hell before I gain another pound. Allowing myself to walk in the sunshine and stop feeling guilty when I spend time with my granddaughters because I should not be baking cookies, I should be writing.

I will say ‘Well done’ to those who meet the 50,000 word goal, and stand and cheer for every soul who answered the challenge, but I will not sign up again next November. Perhaps I’ll try and grow a beard instead!