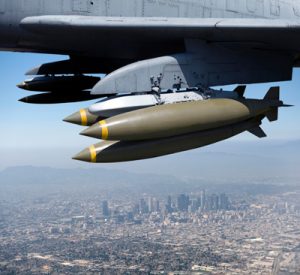 Remember the naval war between Spain and Britain? The one in 1588 where the invincible Spanish Armada tried to take control of the English Channel with their huge and heavily armed ships. If you recall, the English at first attempted to disable the Armada with long range gunfire, but soon realized this kind of shot merely damaged the rigging which was quickly repaired. So the English turned to smaller, faster ships that could close in and take repeated broadside shots into the Spanish ships at short range. This resulted in considerable damage and an Armada forced to turn tail and run, giving the Victory to the British.

What does this have to do with ISIS and the coalition trying to beat them? Everything.

The coalition is like the Armada, with big powerful jets and drones and bombs that can inflict plenty of damage once they’re in place. ISIS on the other hand relies on smaller, faster tactics. Machine guns, suicide vests and trucks coated with armour plate, each one loaded with bombs and driven by men with visions of virgins dancing in their heads as they smash into markets, schools, hospitals etc. ISIS knows the drones and bombers will never get there fast enough to stop them, and so do the people they are attacking.

In effect, ISIS is the British navy, able to navigate more quickly, turn on a dime and deliver destruction much more effectively than the huge, lumbering coalition.

To think that more air strikes are the answer is to ignore not only history, but exactly what is happening on the ground in Syria, and Iraq. Air strikes are an easy sell to a Western public that likes big displays of firepower and very few casualties on our side, but they don’t work. What works, as illustrated in recent battles between ISIS and Kurdish pesh murga, is local military properly trained and armed with tanks, guns and missiles that are capable of delivering the kind of shots that are needed in an instant. The moment the truck loaded with bombs appears, not twenty minutes later when a drone or bomber finally arrives.

And what has this to do with Canada? Again, everything.

Our government plans to withdraw our bombers from the current mission and thank God. U.S. Generals have admitted that all the bombs dropped so far have not managed to stop the threat and despite what our former government liked to pretend, Canada is not a world military power. We don’t have the budget to provide our own military with new equipment so we certainly can’t send the kind that is desperately needed in Syria and Iraq. What we can and should do is send humanitarian aid along with men and women who can train the fighters on the ground to be more effective. And we should help those trying to escape the madness of ISIS.

We are not a nation that turns from conflict, but neither are we a nation of fools. After the tragic events in Paris, we need to resist the bleating of the right and the calls for more bombs, more suspicion and less compassion. Canada can and will be part of the war against ISIS, but we need to be smart about our role, and give those fighting on the ground what they need, versus what we want them to have.

« Sex Ed Made Easy
What I Learned From NaNoWriMo »